Fridays with Franklin will be moving to a new location at Makers’ Mercantile starting Friday, June 17, 2016.

Be sure to sign up for the Makers Mercantile Newsletter and like their FaceBook Page to stay up-to-date on the bi-weekly adventures of Fridays with Franklin!

We know you will love Franklin’s new home and wish you all happy crafting.

The Adventure of the Warp with Two Brains: Part Four

For an introduction to what goes on in this column,  click here.

For the first part of this adventure, and to find out who the heck Mary and Sylvia are, click here.

You’ve seen the fabrics I created for Mary and for Sylvia, and you’ve seen how they were made. You haven’t yet seen what happened once those fabrics came off the loom.

This was my first shot at two projects on a single warp, so as part of my project planning, I checked out different ways to deal with the transition from one to the next.

I chose the one that seemed easiest: I cut a piece of typing paper to twice the desired depth of my fringe–a number I’d worked out as part of my warp calculations–and slipped it into the warp when Mary’s fabric was finished. 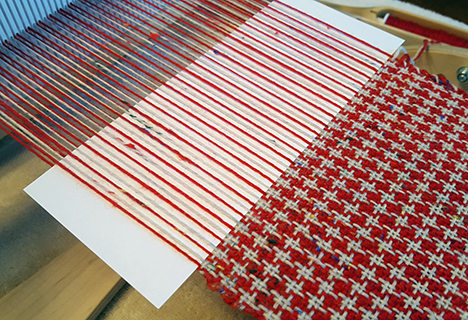 When the whole megillah came off the loom, here’s what I was left with between scarf one and scarf two.

All I had to do was slice that unwoven passage right down the center and blammo, two scarves, plus fringe.

Except I hadn’t left enough space.

Knotting requires extra yarn. Moreover, this fringe was so short that no amount of sweating, swearing, wishing, and hoping would allow even my doll-like fingers to tie it up.

I gave up and went to bed, hoping that perhaps tiny mice might come in the night and take care of it for me. I even left my copy of The Tailor of Gloucester on the work table as a hint.

And the next morning, as if by magic…

And Now For Something Completely Different

Okay, fine. No fringe. If no fringe, then what? Throw it all out and start over? I won’t pretend the thought didn’t cross my mind.

After about an hour of Cookie-Assisted Meditation (CAT), I settled on the idea of making both lengths into what these days are commonly called “infinity scarves”–closed loops of material, usually long enough to be doubled around the neck. If I sewed the ends together, I wouldn’t need fringe.

But I’d still need to secure those cut selvedges, or the fabric would unravel in finishing. That was the first order of business.

In weaving, there’s a popular alternative to knotted fringe called hemstitching. Now, hemstitching tutorials always tell you to that you must do it while the fabric is still on the loom. As my fabric was lying in a forlorn heap on the work table, that ship had sailed.

However, I realized after reading through a bunch of different accounts that hemstitching is closely related to one of the first hand sewing stitches I’d ever learned–blanket stitch, which is a sibling of buttonhole stitch. Both blanket and buttonhole stitch share a common purpose: they keep cut edges from unraveling.

Here’s how blanket stitch works, in two steps. Really, there’s no difference between Step One and Step Two except that the former begins by tacking the sewing thread to the fabric. (Tacking is taking a series of very small stitches all in one place. It’s preferable to a knot–far more secure.)

You’ll notice I worked from left to right, which is the usual direction. If you are left-handed, you will probably want to work from right to left.

When I was finished–it didn’t even take that long*–I had a reasonably secure selvedge,

and a quick but careful pass with my rotary cutter reduced the ends to a minimum.

I did this on both cut edges of both scarves. This gave me fabric stable enough to wet finish (soaked and agitated in hot, soapy water in the sink; rinsed; and pressed flat with an iron through a cloth to dry).

I pressed “Sylvia” gently, from the flat side, on top of two layers of fluffy towels, which helped to avoid flattening the loop pile too much.

To sew the long rectangle into a loop, I wanted a seam that would be as strong and as unobtrusive as possible. I also wanted those cut selvedges to be protected from abrasion.

There are a few seams that will do this; I chose the one that seemed the best bet for working by hand* with this fabric: the flat felled seam.

Sew yourself a nice, strong seam (I used backstitch) just below the selvedge on top, and press your seam** with an iron.

Fold that back selvedge–the one sticking up–towards you and down so it meets the lower selvedge. Now you’ll have a folded flap 1/4 of an inch high. Press** this fold.

Fold that flap down again (it will now be resting on the surface of the scarf) and use back stitch quite close to the folded edge to sew the flap down. Press** the seam.

What you end up with is a strong, small and (how delightful) reversible seam that encloses both selvedges completely.

My seams weren’t absolutely perfect, but you know what? I think they look pretty presentable.

And now, a moment of unadulterated honesty.

I sat looking at the finished pieces

and thinking that I still, after all this work, didn’t like “Sylvia.” Of course, Sylvia liked “Sylvia,” but I thought it looked…weird. And not fun weird, just weird. That’s not a nice feeling.

Sylvia stopped by in the afternoon on the way to her Esperanto poetry workshop for a fitting. I had her put on “Mary,” first.

“I’ll take this one, for sure,” she said, stroking it the appreciatively.

She tried it on, and I’ll be darned…

That’s what it needed. A person inside it. Looped and draped, the fabric came roaring to life–and frankly, was a little more interesting than “Mary.” A complete reversal of opinion on my part. The scarf I’d hated became the scarf I preferred.

There’s a little lesson in there, I suppose. Knowing your own taste is very good. But allowing yourself to experiment and be surprised is even better.

*If you’re wondering about options for securing the selvedge with a machine stitch, there are many. Many weavers like a zigzag or short straight stitch. However, I prefer to work by hand when it’s practical; and a lot of you who are reading this don’t have access to a sewing machine. Always keep in mind–what’s done by machine now was done by hand for centuries. The machine may be a marvelous convenience, but the hands are no less useful for all that. Don’t let the lack of a machine stop you from doing anything.

**Perhaps you are wondering if you really, really must press the seams. Not at all. If you would like to end up doing twice the work with twice the trouble for results half as satisfactory, you may skip the pressing.

Tools and Materials Appearing in This Issue

The Women (1939). For information on sources, visit the official IMDB page .

Designer, teacher, author and illustrator Franklin Habit is the author of It Itches: A Stash of Knitting Cartoons (Interweave Press, 2008). His new book, I Dream of Yarn: A Knit and Crochet Coloring Book has just been brought out by Soho Publishing.

He travels constantly to teach knitters at shops and guilds across the country and internationally; and has been a popular member of the faculties of such festivals as Vogue Knitting Live!, STITCHES Events, Squam Arts Workshops, Sock Summit, and the Madrona Fiber Arts Winter Retreat.

He is the longtime proprietor of The Panopticon, one of the most popular knitting blogs on the Internet. On an average day, upwards of 2,500 readers worldwide drop in for a mix of essays, cartoons, and the continuing adventures of Dolores the Sheep.

Franklin lives in Chicago, Illinois, cohabiting shamelessly with 15,000 books, a Schacht spinning wheel, two looms, and a colony of yarn that multiplies whenever his back is turned.